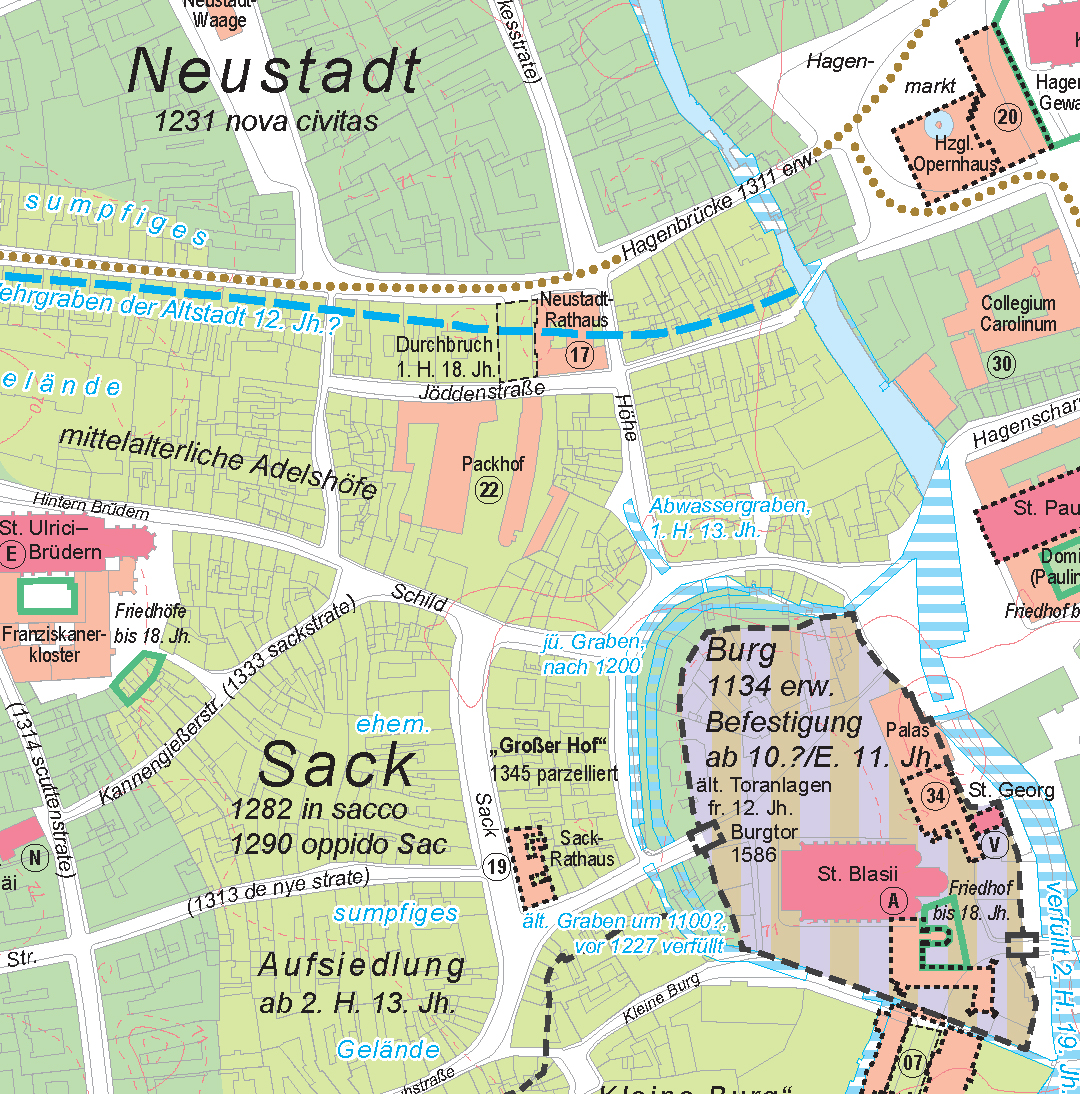 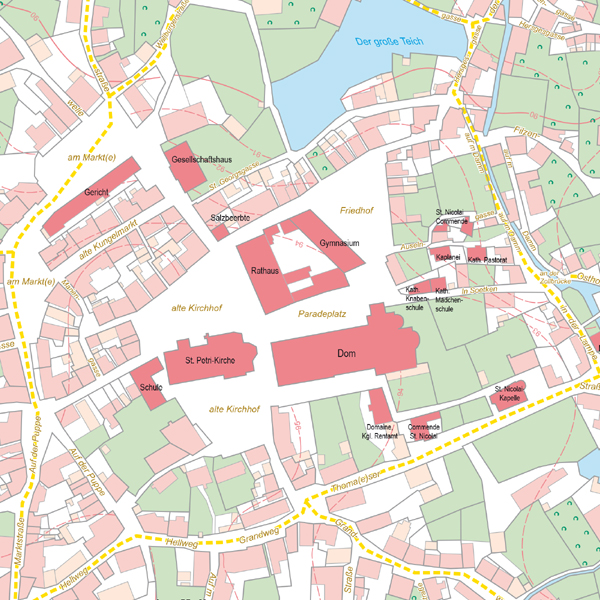 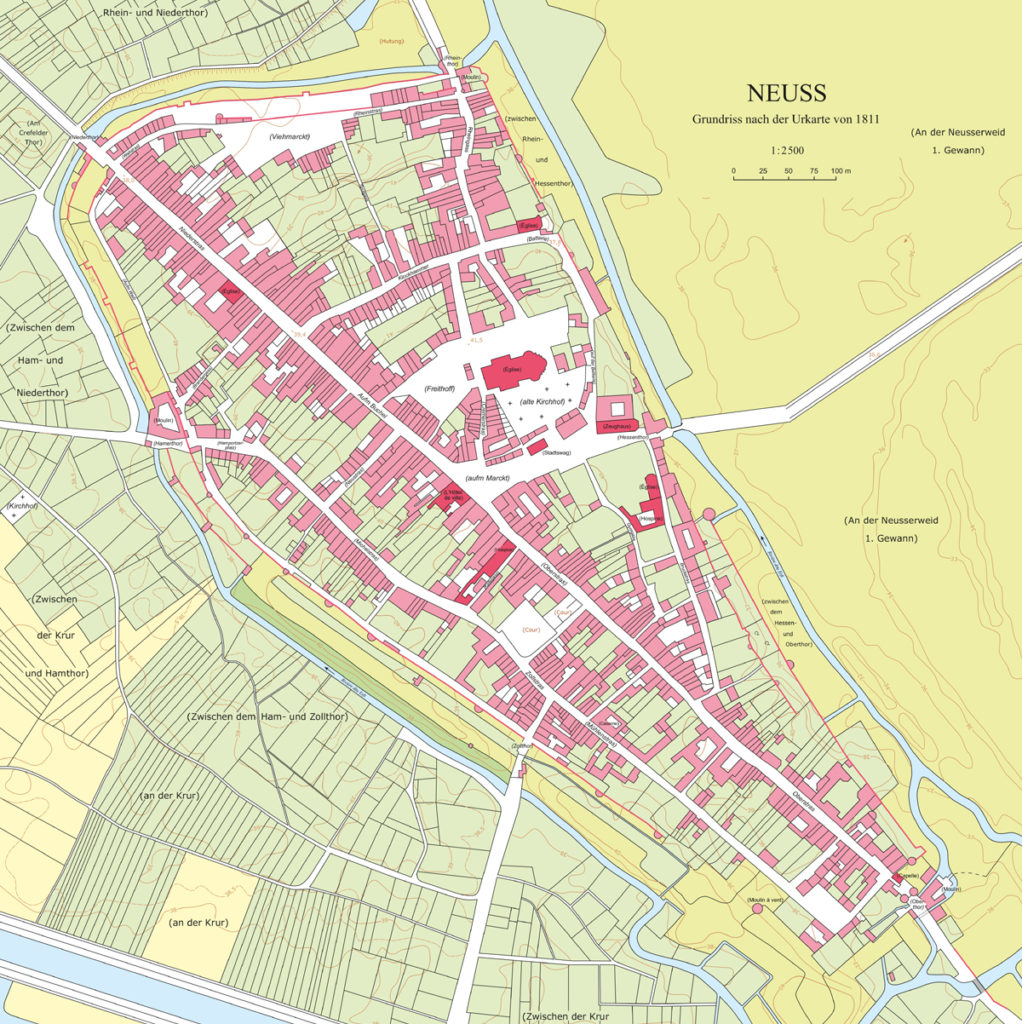 The German national historic towns atlas series (Deutscher Historischer Städteatlas) is being published by the Institut für vergleichende Städtegeschichte – IStG in Münster. Established in 2006 as a follow-up to the older Deutscher Städteatlas (1973–2000, 51 towns) this project produces fundamental research on a sample of German towns selected by typological and regional criteria as a basis for comparative urban studies. To this end, each published atlas provides an edition of pictorial and cartographic source material, most importantly a large-scale 19th century plot plan. Additional thematic maps cover a broad range of topics including archaeological sites, and an analytical text tracing the town’s historical and topographical development.

Next to the print publications, and based on them, the project develops interactive web modules which are freely accessible on the IStG urban history portal.

Westphalia, initially a loosely defined historic region in Northwest Germany, has evolved to become the eastern part of modern Germany‘s federal state (Bundesland) Nordrhein-Westfalen. The project Westfälischer Städteatlas  was initialised to completely cover all settlements of this specific area holding municipal law by c. 1830, the time of the first Prussian cadastral survey. Between 1975 and 2010, this series by the Institut für vergleichende Städtegeschichte – IStG (Institute for Comparative Urban History) in Münster had published a total of 83 towns. Since then, its successor, the present regional series Historischer Atlas westfälischer Städte, has produced 12 volumes (by 2019). Each of these covers one town offering a richly illustrated text and a set of standardised maps (a redrawn cadastral map, three topographical maps and one of historic administrative boundaries) as well as a variety of thematic maps on topics relevant to the individual town‘s history.

Since 1945/49 the state of Hessen comprises several historic regions and territories independent well up into the 19th century like the “Kurfürstentum Hessen”, the „Großherzogtum Hessen“, the „Herzogtum Nassau”, the „Fürstentum Waldeck”, the “Landgrafschaft Hessen-Homburg” and the free imperial city-state of Frankfort. The project Historic Towns Atlas of Hessen  was initialised to cover all urban settlements in this diverse area. Besides the stately records also regional and local sources, shelfed in the regional and municipal archives are used. Between 2005 and 2018 the Hessian State Office for Regional History (Hessisches Landesamt für geschichtliche Landeskunde) has published a total of 17 towns. Each volume contains six or more maps. The core is the standardised redrawn cadastre of the 19th century and the map on the topographical development of the town up to the 19th century, both on a scale of 1:2,500. Two topographical maps at 1:25,000 – one of the early surveys and one up-to-date – show the respective town in its vicinity and its development from the 19th century to the present. The modern map of the town at 1:5,000 features each plot of land and its utilisation, the location of each residential, non-residential and public building, all traffic routes, administrative boundaries and labelling. A general map of Hessen depicts its terrain and the volumes already published or those in preparation. Finally, several sheets with reproductions of historic views, maps, plans, sketches and drawings provide additional information on the history of the town. The booklet included offers an outline of the town’s history, elaborations of the maps, a bibliography, additional illustrations and a structured directory of topographical objects relevant to the town’s development. The electronic version of the Historic Towns Atlas of Hessen  provides different interfaces for working with the material, among them a full-text search resting upon a database-driven implementation of the directory of topographical objects.

The Rheinische Städteatlas is a fundamental historical and topographical work on the history of the cities of the Rhineland-region of Germany. It is the only research project that studies the cities of said region systematically based on a strictly standardised catalogue of criteria.

The main subjects of our atlases as well as their visual design pick up on similar such projects throughout Germany and Europe. They include urban areas which have received municipal law during the Middle Ages as well as cities which were alleviated to that rank in later times or have lost that status during the French occupation in the 1790s and have failed to regain it since. In all significant aspects, it adheres to the guidelines of the International Commission for the History of Towns.